“COP25: Climate communication needs to be

Climate change is a global issue that goes far beyond environmental concerns; it enfolds geopolitical, societal and economic dimensions, which are imperative for global peace, prosperity and stability. The science is now clear and straightforward, human-driven climate change is undeniable, and hence global mitigation efforts are needed. This said, until now, collective action in response to the depletion of the global commons has proven to be a real challenge, a disputed issue with conflicting perspectives and even a failure, especially for those that refer to it as the ‘climate crisis’.

There has been a recent shift in perceptions about the urgency for climate action, highlighted by international environmental movements (Fridays for Future, Extinction Rebellion…), increasing political contributions and engagements and growing concerns about climate change effects, which some are already experiencing. However, there seems to be a gap between this rising awareness and adequate behaviours of the different agents involved. It is necessary to distinguish between large corporate- and state-actors who negotiate their interests in fore that are separate from those of the individual citizens who are also important actors through their consumption and life-style choices. The level of information available to these different agents is likely to be very different indeed. The role of individuals in climate mitigation is crucial. Firstly, because by adapting their behaviour, they may have a real impact on CO2 emissions. Secondly, they are also consumers, so they can influence economic production. Thirdly, in most countries, they are voters, and have therefore an impact on public policies through democratic processes.

Today, most of the global public recognise that climate change is a major hazardous threat that could potentially lead to global catastrophes, yet, continue to take big SUVs to go to work, fly across the globe to enjoy a holiday or eat meat on a regular basis. Modern societies have developed agricultural, social and economic patterns and structures, which harm the environment, and people’s daily lifestyles are deeply implicated. Therefore, there must be innovative strategies to tackle such irrational attitudes, which target individuals and encourage behaviour change. The individual citizens can exert considerable economic and political power if the changes they make privately are concerted in their effect on consumption and politics. So addressing the choices of individual citizens is not an attempt to ‘place the bill’ of climate change mitigation on their plate, but rather a lever in order to enforce changes in the economy and politics that would be difficult to negotiate or enforce otherwise.

Policymaking, especially the deployment of climate change policies, should not only consider what could be done theoretically, but should also be informed by observations, experiences and lessons learned, to understand what can be improved in terms of practicality and feasibility. Therefore, in order to inform future climate policies, we can consider an issue that people treat with a similar irrational attitude and for which effective policies have already been implemented, such as tobacco smoking. Although they may appear as two very distinct topics, psychological and social factors drive one’s decision to smoke, or more precisely, to not stop smoking, analogously to how these factors influence a person’s inaction towards climate change. For instance, the assessment of short-term benefits versus long-term consequences is comparable. Although a smoker is aware of the possible health problems smoking will lead to in the long run, s/he will prefer the immediate pleasure a cigarette provides and therefore attach a lower value to these health consequences, mainly because they are “far in the future” and uncertain. Similarly, although people are now aware of the potential dangers of global warming, people prefer the immediate benefits of ignoring these threats and not changing their habits and lifestyles (as changing behaviours would represent a burden for most of us: renouncing to a delicious steak for vegetables and grains is just one of many examples). Another similar characteristic is the externalities both behaviours encompass. The same way a passive smoker, such as a child who inhales a parent’s smoke, is victim of the smoker’s decision since s/he might suffer from related health issues; the most vulnerable people, often in developing countries, are the first to endure our pollution.

These are just a few of the overarching commonalities that drive people’s irrational attitude towards smoking and climate change. Therefore, lessons learned on anti-smoking policies should inform climate policies. Because anti-smoking strategies have been implemented for a prolonged period of time, we have sufficient hindsight to study those that have proven to be efficient for smoking prevalence, and gain insight for objectives and strategies the COP25 can consider, in order to effectively influence people’s behaviour towards climate change. 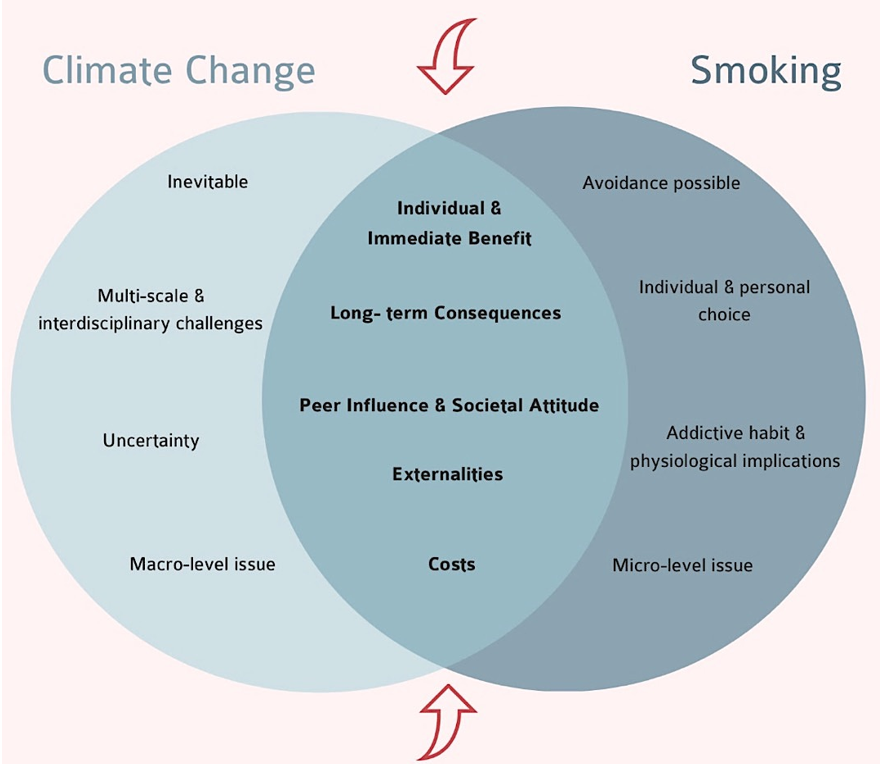 Taxation is an essential constituent of worldwide tobacco control strategies and multiple studies show that it has been one of the most effective policies to reduce demand. Incremental rising costs effect smoking decisions for two main reasons. On one hand, it impacts the overall consumption of tobacco because increases in prices lower demands. On the other hand, in a more conceptual and less tangible manner, taxation affects smoking behaviour because it transforms long-term consequences into short-term costs. Indeed, taxes capture these future costs and ‘convert’ them into present value as consumers indirectly pay for them through their purchases. Generally, data reveal that a 10% increase in cigarettes prices reduces demand by about 4% in high-income countries and 5% in lower-income countries (WHO, 2018). There has already been political endeavour in some countries to implement ‘polluter pays principles’, attempting to make the economic agents, businesses or individuals who are responsible for polluting, pay for the damages they cause to the environment. Building on tobacco taxation observations, climate policies should look forward to establishing a similar taxation mechanism: progressive and regular. Although small increases will at first have no direct effects on carbon consumption, the addition of all the incremental and steady increases of ecological-related taxes over the years will change people’s carbon consumption behaviour and will be generally more approved by the public. It is still however a precarious and on-going process, subject to many critiques, limitations and lack of consensus, with many socio-political implications and re-distributional effects, as the “Gilets Jaunes” (Yellow Vests Movement) movement in France has shown.

The second anti-tobacco strategy we can learn from is effective communication. Standardized Packaging is indeed one of the most cost-effective tools for educating people about the health risks of smoking and therefore reducing overall tobacco consumption, through two main functions: warning and marketing removal. Each time a smoker takes out a cigarette, he will be reminded that “Smoking Kills”, and witness a shocking image of harmful effects of smoking. This repetitive and recurrent aspect of the health-warning message is a crucial element of the policy’s overall success, as learning over time and repetition are efficient in moving away from path dependency and in increasing long-term memorizing. If one applies this observation to an innovative climate communication strategy, it appears that the way we talk about and communicate on climate change seems to be an essential and pivotal element of people’s behaviour. Having scientific and theoretical discourses on climate change distances people from the potential risks. For instance, talking about the ‘significant difference’ between a 3°C vs. 1,5°C global warming might not particularly represent much for non-scientists, but rather dissociate them to the actual potential dangers. When media portrays what might happen in 100 years, or the possible polar bear extinction, it creates distance in both time and space because consumers do not identify themselves with or relate to these problems, as these will have little effects on their day-to-day lives. Climate communication needs to be straightforward: simple, direct and repeated. It should be based more on relatable and understandable facts than on scientific theory, and emphasise the direct risks it would have on the specific individual.

Awareness without action is not sufficient. Now that we understand what climate change actually represents, we must adapt our attitudes accordingly. The COP25 objectives should be to establish a concrete plan of action to fill in the “gap” between awareness and adequate responses. In order to achieve Paris Agreement objectives, the COP25 could think of policies and strategies, which until now have been strongly supply-driven initiatives, aimed at consumers by targeting the demand-side, and therefore influencing behaviours. By articulating policies around collective mobilization for the general public, such as a new taxation scheme or a more efficient communication strategy, we should move towards a better awareness of individual responsibility and thus, catalyse global action toward reducing emissions.